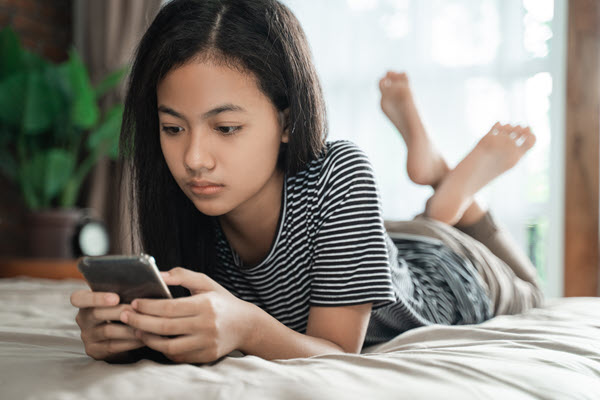 I received my first Kodak camera as a preteen and was thrilled that I could take my own photos. This was in the day when one had to load the film roll by hand, shut the camera, and advance the film before each photo. Once 24 pictures were taken, the film was carefully removed, dropped off at a film development counter, and then the pictures were picked up several days later. The photographs from this camera are very grainy and blurry compared to today’s pictures, but still remind me of happy memories from my preteen years.

Preteens today also like capturing photos of happy moments and sharing these with friends. Social media has made it possible to share photos and videos instantly and connect with those who are far away. Modern technology has made it possible to share information in groups, find those with unusual similar interests (such as rare medical conditions), or have direct connection with famous individuals. This connection is asynchronous though—instead of seeing others’ reaction as they look at a photo or hearing one’s response as we share an accomplishment; reactions are given at a different time and in a location away from us. We can share our stories with a broader audience but are not able to share in and interpret reactions face-to-face. Perhaps this is why intimate details and inappropriate pictures are more often shared online than in person as it’s done without the natural instant feedback that otherwise would make it too embarrassing.

Paradoxically, even with this improved ability to connect, instead of feeling better connected, preteen and teenager girls are feeling lonelier and more socially excluded than ever. Some girls have identified Instagram as being the source for where they first felt “not enough” or “unattractive” as they compared their real life to the perfected and carefully chosen Instagram photos of their peers. Comparing oneself to their peers is a normal part of growth, as developmentally girls ages 12-18 are figuring out their identity, establishing a sense of self, and finding their role in society. Historically, this comparison was among the few other girls their age in their school or community.  Social media now provides a platform where girls can compare themselves not only to local peers, but also to peers throughout the world. Naturally, many compare the worst of themselves with the best in others. It is sobering to note that since 2007, the year the first iPhone was available, suicide rates have tripled in girls and tripled in children ages 10-14.

There is also alarming news with the discovery that Facebook has made efforts to attract young children and preteens to its social media platform even though its own extensive 3-year research found that Instagram can negatively impact girls’ mental health. A recent Pew Research Center survey found that 30% of children ages 9 to 11 reported using Tiktok, 22% used Snapchat, 11% used Instagram, and 6% used Facebook. Some teenagers have identified social media as the root of their current depression and anxiety. Anxiety may come from FOMO (Fear Of Missing Out) which keeps some teenagers glued to their phone, giving up much needed sleep as they watch for posts or updates. Depression may come from cyberbullying, which can be instantly passed on to others without the normal negative or protective feedback that might come if it was done in person.

This post is not meant for gloom and doom, but to inform so that we as parents and adolescents can make educated decisions about using social media.

What can we do as parents?

Open calm discussion about the risks and benefits of social media can help teenagers become savvy to the dangers of social media. One of the first steps is to sit down with our preteens and teens and ask how much time they are spending on social media, what they are looking at, and how social media makes them feel. This conversation may bring awareness and naturally turn into a discussion about limits or changes they’d like to make. We can also set up family media use rules.  The American Academy of Pediatrics has an easy-to-use free family media plan [1] as well as a media time calculator [2]. These tools can help clarify expectations and rules and comes from an established organization, so parents don’t have to take the blame for suggested rules. This plan helps identify device free zones, designate the time and place to turn devices in at night, set time limits on social media, and help make time to engage in exercise and face to face healthy interactions. Adequate sleep, daily exercise, good nutrition, and development of close relationships are critical to mental health and these basics should be evaluated, especially when there is new onset depression or anxiety.

Social media can be a fun engaging way to connect, but recent research also indicates it can have serious consequences on our children’s mental health, especially our daughters. Education and open discussion about the potential negative consequences of social media, along with clear family rules and guidelines can help our daughters understand the benefits and risks associated with social media use and develop a healthier self-image and identity.